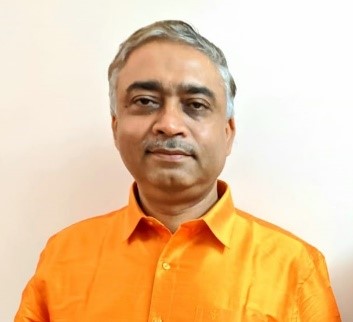 Dr. Virendra M. Tiwari obtained his post-graduate degree in Geophysics from Banaras Hindu University (BHU), Varanasi. He took up a scientific career at CSIR-National Geophysical Research Institute (CSIR-NGRI), after receiving a PhD in Geophysics from NGRI-BHU. He has worked as Post-Doctoral Researcher at the IPGP, Paris, France and LAGOS-CNES, Toulouse, France and as Visiting Scientist at the GEOMAR/CU Kiel, Germany and CU, Boulder, USA.

His academic excellence has been recognized by National Merit Scholarship; ONGC-AEG Best Thesis Award; Young Scientist Awards from INSA, CSIR, UP S&T Krishnan Gold Medal by IGU, National Mineral Award by Ministry of Mines, GoI, to name a few. With well recognized scientific contributions, Dr Tiwari is an elected Fellow of the Indian National Science Academy (FNA), National Academy of Sciences India (FNASc), Indian Academy of Sciences (FASc) and Telangana Academy of Sciences (FTAS). He is a recipient of the SERB J C Bose Fellowship (2022). He is also a member of several national and international committees.

His research focuses on deciphering the mass distribution and mass transport related to the geophysical phenomenon on surface and at depth in the Earth. Besides well cited research papers in leading journals; he has contributed significantly to the important R&D projects for the groundwater and the Oil and Mineral Industries in India.